After a two year working period with our new Greenkeeping Consultant from Germany Hamburg Norbert Lischka. Hardelot Golf Club has moved forward in quality greenkeeping, results and methods to great effect. The golf course has moved from 82nd in the European Rankings to 27th in this short space of time. The highest leap for any golf course in Europe of date. Hardelot has become self sustainable with new low fertilisation application standards, good mechanical practices put into place by this Master Greenkeeper. Verti-draining of all areas, spiking, top dressing and deep drilling greens to help improve drainage, playing surfaces and firmness. The golf course was in a dilemma with its greens before Norbert was taken onboard. There were questioned raised by the owners and the European Tour whether or not to reconstruct the entire 18 putting greens of the Pines course due to very soft wet playing surfaces. Norbert took the following actions. Firstly he discovered that when Tom Simpson built his greens back in the early 1930’s they installed what was called a ‘Mill Pond Layer’ around 40cms under the putting green of a black organic substance which helped keep moisture near the putting surface. In the 1930’s they did not have irrigation so some of the top architects used these working practices. Norbert decided to deep drill all the putting areas to a depth of 50cms breaking the crust and then filling in the 28mm wide holes with a mix of sand and 5% organics. The club has made a saving of around 1.000.000€ and been able to keep its original Simpson designs.

Re-seeding programs with a mixture of bents and fescues were also top on Norberts list bring down the quantities of watering and feeding to make for a healthier plant. Norbert is a great believer in hand fertilising and treatment of illnesses on the course with a back sprayer. His eye for precise cutting heights and well maintained machinery also allows for a quality playing surface. The hand mowing of greens has also been introduced by Norbert to help improve the quality of the surface without stressing the grasses.Today Hardelot is on its way to have firm quality playing surfaces which need less feeding and watering.
Not only is Norbert perhaps one of the best greenkeepers I have ever come across in my 30 year career within the golfing industry but to top it all off he is a very strong team leader, hard working, respectful and most of all a great gentleman. 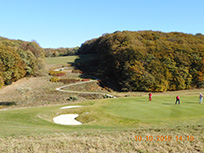 I am looking forward to meet you